Motorcycles can be a useful and enjoyable means of transportation but, they can also be incredibly dangerous. The facts discussed in this article are based on data from the Fatality Analysis Reporting System (FARS), which is part of the Unites States Department of Transportation.

In 2015 the number of motorcyclists killed in crashes in the U.S. totaled 4,693. This number had been on the decline since the early ‘80s, but started increasing again in 1998 and this increase lasted through 2008. Of all the fatalities that occurred in motor vehicle accidents, 13% were among motorcyclists. This figure was more than twice the number that occurred in 1997.

Among those motorcyclists killed in 2015, figures show that 27% were operating their motorcycle without a valid license. This surpassed the percentage of unlicensed drivers of passenger vehicles who were killed in traffic accidents in 2015, which was 15%.

Of all the motorcyclists who were killed in 2015, a whopping 91% were males.

Among the motorcycle drivers killed in 2015, a whopping 88% were driving touring bikes that had engines of more than 1,400 cc in size, whereas just about all supersport bikes were equipped with engines that were 1,000 cc in size or smaller.

Among those killed in 2015 driving supersport motorcycles, helmet use was 77%, which was the highest. Approximately 50% of drivers killed on touring motorcycles, standard motorcycles or cruisers were wearing helmets

When & Where They Were Killed

In 2015 the majority of motorcyclist deaths (60%) happened during the months of May through September.

Fatalities were at their highest in July and at their very lowest in February.

In 2015 nearly half (49%) of deaths on motorcycles happened on weekends, and they were more apt to occur in the evening hours after 6:00 PM, compared to during the week.

In 2015 nearly half (48%) of deaths on motorcycles happened on major roads, but not freeways and interstate highways. There were more deaths (49%) that occurred in urban areas than happened in rural areas (41%).

Among those killed driving a motorcycle in 2015, 28% were found to have a BAC at or over 0.08%. This figure rose to 42% among those in single-vehicle collisions.

In 2015, of the ATV riders who died in single-vehicle crashes, in 62% of these accidents, the ATV rolled over in the crash. This percentage was similar to fatal accidents involving large trucks and SUVs, but higher than for deaths in similar accidents involving cars, which was 44%.

The deaths of ATV riders on public roadways during 2015 peaked in July, with 56% of the deaths occurring during the months of May-September that year.

Of the ATV riders who lost their lives on public roadways in 2015, 73% were driving on rural roads and 63% of those fatal accidents occurred on minor roads.
In 2015, half of those killed driving ATVs on public roadways were found to have BACs at or over the legal limit of 0.08%. ATV drivers who were 40-49 years of age when they were killed made up 63% of that group.

Motorcycle accident cases are extremely complex, which means you need a highly experienced lawyer with in-depth knowledge in this specific area of the law to handle your case. If a loved one had been killed on a motorcycle due to another's negligence, please contact us. The attorneys at O'Connor, Runckel & O’Malley have a proven track record of prevailing in such cases, both in court and in negotiating maximum settlements. With more than 50 years of trial experience, we are more than willing to take anyone to trial to fight for our client if they have been wrongfully injured or killed.

SAN PABLO, CA – A motorcyclist was killed Monday morning in a hit-and-run crash involving a big-rig travelling westbound on Interstate 80 in San Pablo. This was tragically the second fatal collision on the very same stretch of highway that day. The Contra Costa County Coroner was able to identify the victim.

Nicholas Brown, 35, from Fairfield, died in the collision, which was called in at 6:22 a.m. The accident happened on westbound Interstate 80 near El Portal Drive.

CHP Officer Matt Hamer said the big-rig truck, which was described as being yellow with a white trailer in back, hit Brown while making an unsafe lane change. Brown then struck another car, and this caused him to be ejected off his motorcycle, throwing him onto the highway. Brown was pronounced deceased at the scene.

Witnesses observed the big-rig driver pulling over and remaining for about five minutes before driving off, Hamer said.

A big-rig matching the description was later pulled over by officers, but that truck is not thought to be the big-rig involved in the crash. Hamer said that the search is still on for the suspected vehicle.

According to CHP officers, all lanes of the highway were reopened by 7:55 a.m.

Earlier that morning, in a separate crash on the same stretch of Interstate 80, Lindche Tran, 25 from Richmond was killed.

At approximately 4:05 a.m., Tran was driving along in a Honda Accord when suddenly it spun out of control, hitting the center median. The vehicle came to a stop facing the opposite direction and with lights out, Hamer said.

As Tran exited her car, a Dodge Charger was approaching and the driver could not avoid crashing into the Honda and Tran. She was pronounced deceased at the scene, said Hamer.

There were two occupants in the Dodge and both were transported to a local hospital suffering from minor injuries, Hamer said.

The highway remained shut down until about 6:10 a.m., which was less than 15 minutes prior to the collision that took Brown’s life.

Anyone who has information on either traffic accident is encouraged to phone the Oakland CHP Office at (510) 450-3821.

If you have lost a loved one in an accident caused by another, you may be eligible to seek compensation. That compensation will include present and future wages, medical expenses, and funeral costs, but it will also include loss of love, guidance and companionship, moral support, and financial support. Protect your rights, contact an experienced wrongful death lawyer at O'Connor, Runckel & O'Malley LLP.

Lane splitting while riding a motorcycle is legal in California as long as it’s done safely. Lane splitting is also known as lane sharing, white-lining or filtering and refers to the practice of a motorcyclist weaving between the lanes of slower moving or stopped traffic or riding between lanes to get to the front of the traffic stopped at a light.

Experienced motorcyclists who want to practice lane splitting should abide by the following safety guidelines:

1. Never travel at more than 10 mph faster than the speed of the other traffic on the road. The faster you go, the more dangerous it is. 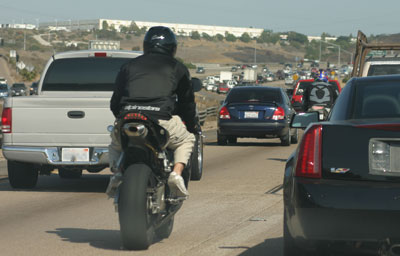 2. When the traffic is going 30 mph or faster, it really is not safe to lane split. As speed increases, so does the danger.

3. It is usually safer to confine your lane splitting to just the #1 and #2 lanes and avoid doing it between the other lanes of traffic.

4. Before splitting, take in your entire environment, the width of each lane, what size the vehicles are surrounding you, the conditions on the road, the weather and if lighting is likely.

5. Stay alert and expect the unexpected. Anticipate that other road users will change lanes and/or make other quick movements.

The 4 Rs or Rules of Lane Splitting:

Be Reasonable, Responsible, Respectful and aware of the Roadway and traffic conditions.

When NOT to Lane Split

Safety Tips for Those Driving Other Vehicles

If you or a loved one has been injured in a motorcycle accident and would like to speak with an attorney, please contact us.

It appears that older riders become more seriously injured than their younger counterparts. Brown University researchers claimed declines in reaction time and vision, along with older riders favoring larger bikes, which are more prone to rolling over, and the enhanced fragility of people as they get older as causes.