California Highway Patrol received a call at 11:00 PM on June 17, 2016 reporting a two-vehicle collision between a Audi sedan and a Ford Explorer, on Byron Hwy. south of SR-4 in East Contra Costa County, which is unincorporated. As units headed to the scene, another call came into CHP dispatch reporting that the male who had been driving the Audi sedan had been seen fleeing on foot.

The CHP unit that arrived first on scene saw the unoccupied Audi sedan was facing north in the northbound lanes and had suffered major front-end damage. The Ford Explorer was facing east next to a tree and a little south of the Audi. Emergency responders soon arrived on scene from Contra Costa County Fire Department and took care of all the occupants in the Ford Explorer. 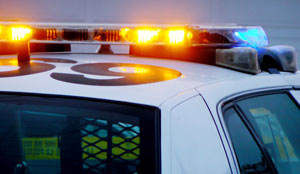 On Friday at 11:02 PM firefighters from East Contra Costa Fire Protection District responded to a call from Byron Hwy. near Kellogg Creek Rd. Firefighters extricated five occupants from the disabled Ford SUV, two adults and three children. Two of the children had major injuries, including broken bones. They were soon taken by helicopter to UC San Francisco’s Benioff Children’s Hospital located in Oakland. The other child sustained minor injuries and was taken to the same hospital by ambulance. The adult driver and the other front passenger were the children’s parents and they sustained major injuries, including broken bones. They were taken via ambulance to John Muir Hospital in Walnut Creek.

The accident ended up blocking both lanes of traffic as two medical helicopters had to land and take off. The roadway was cleared by 12:51 PM. CHP was still trying to determine if a stolen car was involved in the collision.

Preliminary investigation by the CHP indicates that the Audi was going north on Byron Hwy. at a very high rate of speed. As the Audi tried to pass the Ford Explorer, it used the southbound lane, but oncoming traffic caused it to swerve back into the traffic going northbound. This unsafe turn caused the Audi to crash into the back of the Ford Explorer, which then forced the Ford to crash into a tree. The Audi was totally disabled, so the driver parked it in the northbound lane, and immediately left the scene on foot.

After the CHP Officers found the suspected driver a DUI investigation was conducted on the male driver who fled the scene and it was determined that he had been driving under the influence. He was then placed under arrest on felony DUI along with felony hit and run, and booked into the Contra Costa County jail.

If you or a loved one has been the victim of motor vehicle negligence and would like to speak with a Bay Area auto accident attorney, please contact us. We are here to answer your questions and discuss how to protect your legal rights. The automobile accident attorneys at O’Connor, Runckel & O’Malley are well known and respected throughout the legal community and among our clients. From our offices in Contra Contra Costa County, San Francisco and Sacramento, we serve clients throughout Northern California. Our experience and expertise are available to you.